You Choose The One – The Truth About Believing In The One

Q: Do you believe in the one? Is it true that there is only one person out there for you to marry?

A: My husband and I have different perspectives on the answer to that question.

From his perspective: when he met me, he “felt something” different inside of him that drew him to me. He called a friend of his on the phone the next day and said, “I think I met the woman I’m going to marry….” In his heart, he felt like I was the one for him.

From my perspective: when I met John, I was instantly drawn to his heart, his kindness and his compassion toward people. I wasn’t thinking marriage, or the one, but I found myself hoping to get to know him more as a friend. In my heart, I believed there might be others out there that could be a good match for my life – but this was a man I wanted to get to know.

But even with different perspectives – the next steps were still the same:

We got to know each other.

We allowed time to pass – because time reveals A LOT!

We cultivated a friendship, that grew into a dating relationship.

We involved our friends and family.

And most importantly, we passed through the four seasons of a relationship (if you don’t know what I’m referring to, check out Love In Every Season: Understanding the Four Stages of Every Healthy Relationship).

We waited and watched as the qualities and traits we saw in one another unfolded consistently through each season of our relationship – as evidence that we would be a good match.

And with each passing day, our love, respect, and admiration for one another grew and developed. Until we finally decided that we were FAR better together than we were apart.

And at the end of that realization – we chose marriage.

Because no matter what you believe about the question of THE ONE, what really matters is that you understand this important truth:

Once you CHOOSE someone to marry, they become the one. Once you say “I do”, you have decided to walk through life with one person by your side.

No matter what you believe about the answer to this question, you still have to ownership for your marriage choice. Because it’s a choice that impacts you for your entire life.

So don’t choose out of desperation, or fear, or doubt.

Don’t choose because you feel forced, or pressured, or because time is slipping away.

Don’t choose based on the lie that “this is as good as it’s going to get” or that “there are no more godly ones out there”.

Don’t choose based on the fickle wish-list that Hollywood tries to fool you into believing.

Choose – when and only when – you see the qualities, traits, and behaviors in someone that evidence to you they’ll be the one you want walking by your side through life. Choose someone with which you’ll be better together. And be watchful as those important character traits unfold in your relationship one season at a time.

You choose the one. So make a choice you’re ready to live with for the rest of your life.

Whether You’re Single, Married, or Engaged – Learn about the Four Seasons of Every Healthy Relationship and how each season offers you ingredients that will teach you how to build a love that lasts for a lifetime.

This post originally appeared on True Love Dates on January 30, 2020. Used by permission. And Check out Debra’s Love + Relationships Podcast on iTunes or wherever you get your podcasts: 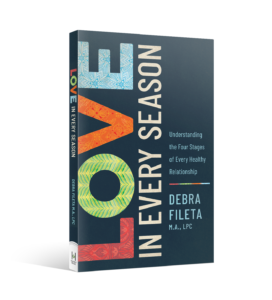 DEBRA FILETA is a Licensed Professional Counselor, national speaker, relationship expert, and author of Choosing Marriage and True Love Dates, and Love In Every Season. She’s also the host of the hotline style Love + Relationships Podcast. Her popular relationship advice blog, TrueLoveDates.com, reaches millions of people with the message of healthy relationships. Connect with her on Facebook, Instagram, or Twitter or book a session with her today!

People say time heals. I sometimes wonder about that. Particularly when I’m in the middle of a devastating loss with... READ MORE →

5 Dating Mistakes To Stop Making in 2020

Are you making any of these 5 dating mistakes? When it comes to dating and relationships, you can’t just keep... READ MORE →

How To Attract A Spouse

I don’t remember which year it was, but I was about middle-school-age. My family and I were in Ocean City,... READ MORE →